Give it Rice: A true underdog story 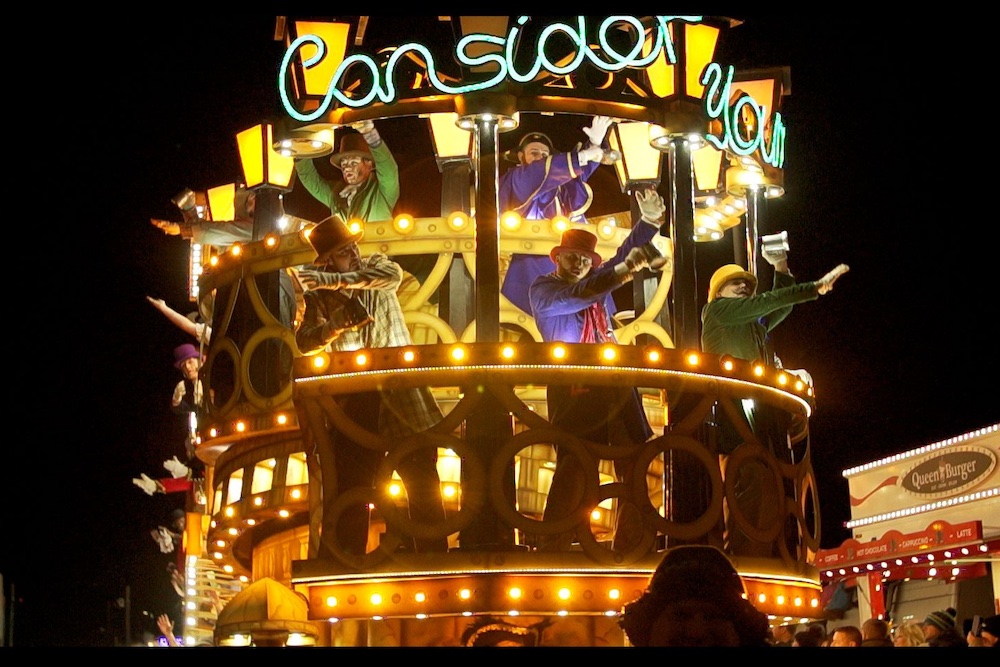 “People who never even knew Bridgwater Carnival existed say they were moved to tears. People laugh, cry and say the tension is palpable. It’s great to have such a strong emotional response,” says documentary filmmaker Richard Ridout whose latest film, Give it Rice, has gone viral…

Give it Rice is a feature-length documentary following two rival teams taking part in the Bridgwater Carnival in Somerset; an illuminated spectacle that takes place every November. It was screened at Glastonbury Festival, in multiple cinemas around the South West and has been featured on the BBC.

Here, we ask Richard Ridout about the filmmaking process, what his hopes are for Give it Rice and to share any advice he has for budding filmmakers.

There have been various attempts to make a film about Bridgwater Carnival over the years, what made you feel you wanted to give it a go?

Before I had committed to making the film, I heard Aaron Sorkin (Oscar-winning screenwriter) talking about the best stories. He said something like “in a story, there’s no such thing as a goal that’s too big and an obstacle that’s too formidable. What you’re talking about here is an incredible story”.

Give It Rice fit these guidelines exactly. But of course it wasn’t script, it was happening in real life. This advice gave me confidence and spurred me on to make the film. You were raised around Bridgwater and went to carnival every year. How important was your personal connection to the carnival when making the film?

I would often tell people that I grew up in Bridgwater, thinking that would help me gain trust, perhaps. But I honestly don’t think it mattered from their point of view. There’s often someone filming them.
On a personal level, it felt right that I was making the film.

The challenge was going to be: making a film as entertaining as possible in the most respectful way to the people in the film. Lucky, I seem to have managed this. I heard that some Gremlins [one of the rival Carnival teams] had said they weren’t going to watch the film – they knew the outcome. But when we screened the film at Glastonbury Festival, some Gremlins came up to me afterwards, beaming, wanting to shake my hand. This was a great moment for me. A film about rivalry had brought people together.

Why did you choose to follow The Marketeers – the underdogs – rather than the Gremlins, who won every year?

Everyone loves an underdog. We empathise with the underdog and we want them to win. When I began editing this film I watched all the Rocky films in a week, for research. There’s a reason those films were so successful. It’s pure joy when an underdog comes out on top. I also watched Sister Act – see if you can spot that in there… What were you hoping to achieve with this film?

What challenges did you face, during the years spent filming, editing and producing Give it Rice?

This film was made in our spare time with no investment. Everyone worked for hundreds of hours for free. We’ve had a great time. But it took longer because of these limitations.

How do you feel now about the final film?

I’m a perfectionist and there are still things I would change if I could. But I’m very pleased with it. I watched the live stream on YouTube recently and it still moved me even though I’ve seen it about 500 times.

How has it been received by the public?

Both people involved in the Carnival and people who never even knew it existed say they were moved to tears. People laugh, cry and say the tension is palpable. It’s great to have such a strong emotional response.

What do you consider your greatest success, in terms of this film?

Probably the Glastonbury Festival screening. Julien Temple curates an area at the festival called Cineramageddon and he hosted a Q&A with me after the screening. I’ve followed Julien’s films for most of my life. I went to his screening of Filth and the Fury at Bridgwater cinema. I also went to an early screening and feedback session for his Glastonbury film. Here I voiced a couple of opinions which went down badly.

But before all of that I was an extra in Pandaemonium. They did two takes of my scene, where I was dragging a donkey across the road as Emily Woof banged on a door. On take one, she banged. My head snapped towards her in shock (I was acting). “Cut!” Said a voice. “Richard, your head doesn’t need to snap across like that, less of a reaction would be great please”. They reset the shot. “Action!” Emily woof banged. My head snapped across exactly like before. “Cut. Ok, I think we’ve got it” by which they meant “we’ll cut him out in the edit” which they did.

Anyway, over 20 years later and here I was at Glastonbury Festival, being interviewed by Julien Temple for a film that I had made. I still think I made a bit of a tit of myself but it didn’t matter because Julien Temple thought my film was good enough for his little corner of Glastonbury. Your film has led people to tears, it’s been described as the best documentary they’ve ever seen and it is spreading quickly on social media. What is it about your film that is causing this reaction?

We go on a journey with this group of people and become invested in what they’re doing. They’re trying so hard, they’re devoted and so passionate. But on top of this, it’s a story of two best friends who are divided for years but are reunited by the events in the film. I think people care about Alan and Matt, they can relate to them, and they are moved by what happens at the end.

What would you do differently, if you could go back?

I couldn’t have hoped for a better outcome in terms of story, so I don’t want to complain. There are a few technical things I will work on for the next film but aside from that I’m really happy with the way things have gone.

What would you like to see happen with the film now?

I just want as many people to see it as possible. I hope people enjoy it and share it. Some endorsement from someone influential would really help. What are your top three tips for someone else keen to make a documentary film?

What’s next with your filmmaking?

I’m tentatively looking at new subjects such as wrestling in the UK. And it would be nice to find someone who is better at producing than me to come on board with the next one … maybe we could even find some money to help us do it.

Give it Rice is available on YouTube. You can watch the trailer here or watch the full film here.